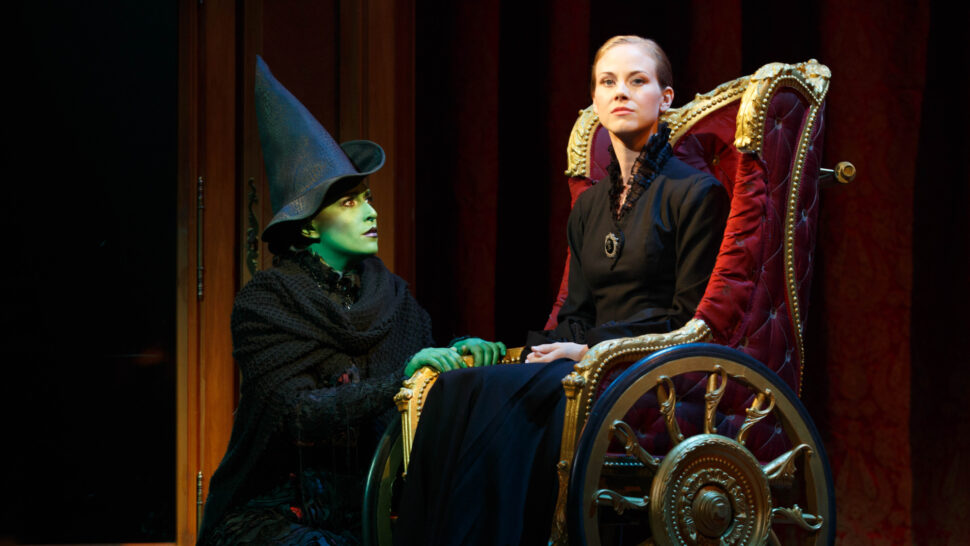 The following article was published in the ILMI E-Bulletin, November 13th, 2020

Image shows Nessarose, a lady in black with hair tied back, sitting on red cushioned and gilted wheelchair throne, looking ahead in the distance with Elfaba, the emerald green-skinned witch, in black hat and robe, kneeling beside her, listening. Both are against a a black and wooden stage background.

I have to admit, the #notawitch controversy surprised me. I thought, haven’t there been centuries of damaging cultural representations like this which nobody seemed to care about? I worried that the outrage to a seemingly fantastical deformity made us look oversensitive. But I was wrong because finally, here it is: a modern representation so blatantly monstrous even to the able-bodied that once you understand it you can’t but be horrified. Maybe, finally, what we’ve been saying for decades will be understood.

Unbeknownst to me, the limb difference that Anne Hathaway’s Grand High Witch displays in the recent 2020 adaptation of Roald Dahl’s The Witches, is exactly a form of ectrodactyly, or cleft or split hand, where one or more fingers may be absent or differently formed. The original book and 1990 movie only mentioned “thin curvy claws, like a cat,” which were likewise concealed in gloves. It teaches children to watch out for the terrifying signs of a witch, and I distinctly remember my childlike paranoia as I watched out for women with violet eyes. Other children now will do the same, and the fact that this might be the first time these kids will have seen their condition represented onscreen, and in such a context, makes it more devastating.

We are all familiar with the lamentable trope of the disabled person as villain, the implication being that “deformity of body symbolizes deformity of soul” (Longmore, 1987). Most of us have at least one of these horrible portrayals that got under our skin, and you are not a snowflake for being deeply hurt by them. For me it was, funnily enough, another witch that I wish had been called out instead of celebrated: Nessarose, the Wicked Witch of the East from Wicked the Broadway musical of 2003. I was 17 when I saw it in the West End, and instead of it being a magical experience I was reduced to an inconsolable mess of tears on returning to our hotel room. My sister says she will always remember how much it affected me.

Nessarose was one of three sisters, including Glinda the Good Witch and the rebel Elphaba, who becomes unfairly coined The Wicked Witch of the West- unlike her disabled sister who “deserves” her fate. The injustices Elphaba experiences because of her skin colour (green) are central to the play. Some of that revolutionary spirit should have been transferred to Nessarose. But alas, weary of her “sorry life,” she begs Elphaba to cure her. “All my life I’ve depended on you and this hideous chair with wheels/Scrounging for scraps of pity to pick up and longing to kick up my heels”. And lo and behold, the miraculous walking scene, typically met with cheers from the audience.

Once “healed,” the boy who dated her out of pity decides she no longer needs him and leaves to find the woman he really loves. Enraged, she casts a spell on him with dire consequences, thus sealing her fate as a “tragically beautiful,” “alone and loveless” villain- the fate her condition warrants.
This portrayal damaged and embarrassed me and played on my teenage fears that I too was a burden who could never find love. Let’s hope the Wicked movie due in 2021 will not be a repeat. Despite what these cheap attempts at creating impactful characters depict, we are none of us hideous or tragic, there is nothing wrong with us and we are infinitely lovable.